Southport Board of Aldermen: Up Your Arts Updates Project Plans 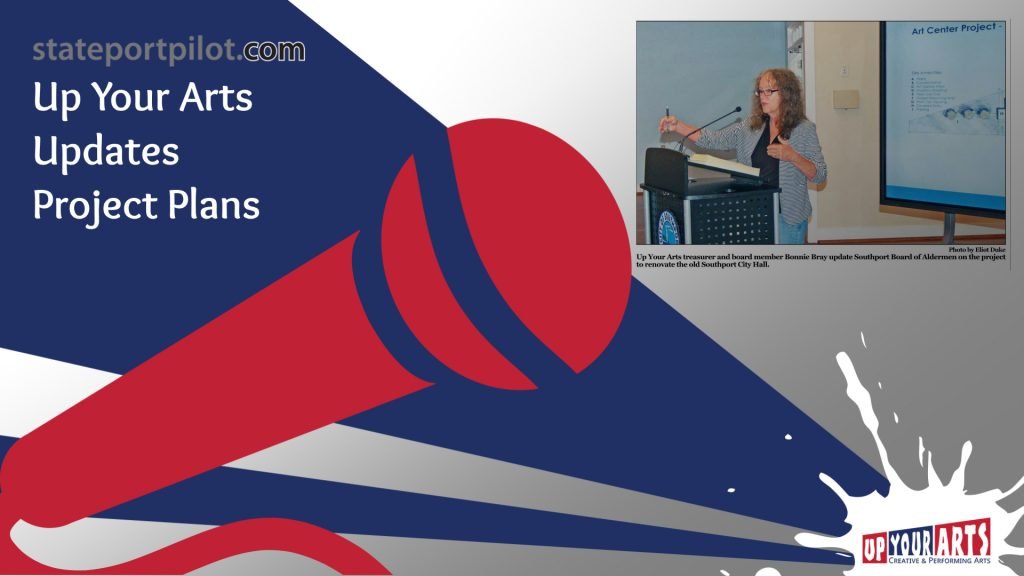 Up Your Arts (UYA) submitted a third memorandum of understanding for review during the May 12th Southport Board of Alderman meeting as the nonprofit moves forward with its plans to renovate the Old Brunswick County Courthouse/City Hall on More Street.

Southport Board of Aldermen: Up Your Arts Updates Project Plans

Up Your Arts (UYA) submitted a third memorandum of understanding for review during the May 12th Southport Board of Alderman meeting as the nonprofit moves forward with its plans to renovate the Old Brunswick County Courthouse/City Hall on More Street.

UYA treasurer and board member Bonnie Bray updated the board on the current phase of the more than two-year-old effort to breathe life back into the former city landmark. In submitting the latest memorandum of understanding, Bray said the nonprofit has raised 90% of the funds needed to complete phase 2 of the architectural services and provided the alderman with the overall layout of the building’s interior that included preliminary conceptual floor plans.

“We finally have something to show,” Bray said. “Completion will benefit Southport and serve as a center for municipal business. It is highly visible to the downtown streetscape, and is envisioned as a vibrant community center and resource for nonprofits and conducting municipal business.”

Bray presented three drawings of the building’s interior floor plans which featured: a number of offices for nonprofits to use as satellite headquarters; a gift shop; art studios; meeting rooms; a music chamber; full kitchen; space for wedding events; a basement for storage; green and dressing rooms for actors and other performers; and a roof deck. The building will also be 100% disabled accessible.

“It is a conceptual site and floor plan,” said Bray. “We will end up with something fairly quickly. The architect will eventually provide us with renderings, but we have a ways to go before we get there.”

Bray said once the interior design phase is over, UYA will hold public meetings to see what the citizens want from the building, as the nonprofit has done over the past several years. UYA submitted its first memorandum of understanding to the Board of Alderman in November 2019, and a second one 13 months later. The latter addressed development aspects of the project, like program and design. Estimates for the renovation 2 years ago were $1.8 million, and prices on anything construction-related have not gone down since then. The third phase will complete architectural services and establish a board of trustees as a legal entity to identify specific funding sources to take the project into pre-construction.

“It’s been a journey, and it’s still continuing,” Bray said. “We hope we can keep on going.”

With UYA advancing its pre-construction plans, Alderman Rich Alt said, now would be a good time to figure out what the future holds for the former courthouse. Bray said UYA is hoping to have the same relationship with the city as the Franklin Square Gallery and the NC Maritime Museum at Southport and be able to rent the building for $1 a year, as those two locations do. UYA would maintain the building and pay all of the expenses, while the city keeps the lights on and allows the nonprofit to access the site. Alt wanted to know what the “end game” was with the building, which he feels is a major asset to the city and its taxpayers.

“What I’m thinking is before you spend $2 million in the fiscal environment we’re in, on a building that’s in downtown Southport, with a water view which is worth a lot of money, what do the citizens want us to do with that building?” Said Alt. “I’d rather have us have that open discussion before you spend a whole lot of money doing something. This has been going on for 2 and a half years, and as I read each memorandum of understanding there is no end game discussed.

“I’m not suggesting for a minute that I’m against this program. All I’m suggesting is that building is worth millions of dollars. And are we giving it up to Up Your Arts for basically a dollar a year? If that’s what everybody wants us to do, I’m for it, but we have to have that open discussion.”

Alt added that while he thinks most people would support the courthouse’s renovation into a community art center, the public needs to be included in any further discussions regarding construction.

“I think we have to have those kinds of meetings somewhere along the line before UYA spends any more time and energy and money to go forward,” Alt said. “That’s my suggestion. The plan looks wonderful this is big money for this town, and we should have some kind of agreement with you.”

Alderman Karen Mosteller said many of the ideas currently being discussed with the building came from public discussions over the past couple of years.

“But there is no document,” Alt responded.

Mosteller said the focus right now is on preconstruction.

“It is my understanding … so far, everything they’re doing is feasibility,” said Mosteller. “There has not been a hard decision made about anything and certainly there will be meetings about that sort of thing. A joint civic and private partnership in essence is what this is. The city will have a role.”

Alt said eventually something more concrete will be needed.

“I’m all for the fact that you’re doing the feasibility study and seeing what this will look like,” Alt said. “But at some point you actually have to put pen to paper.”

City Attorney Norwood Blanchard II will review the latest memorandum of understanding in the coming weeks and bring it to the board at Hune’s meeting for a vote.