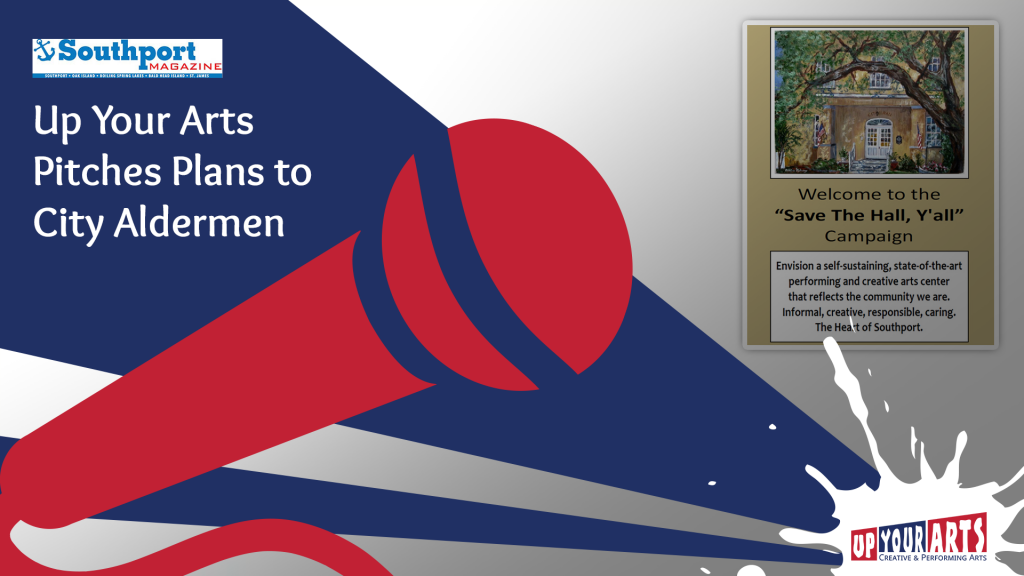 Up Your Arts casts their bid to handle renovation of Southport's historic City Hall.

Up Your Arts (UYA) presented a detailed plan to the aldermen during last Thursday’s meeting to convert the old Southport City Hall, and former Brunswick County Courthouse, into an arts-focused community center.

According to a request submitted to the aldermen, if approved, the project would take “optimistically” two-and-a-half years and cost an estimated $2 million, at no cost to city taxpayers.

Aldermen Robert Tucker and Rick Pukenas will thoroughly review and discuss the proposed plans and a memorandum of understanding drafted by UYA’s attorney.

The organization is asking that Southport enter an initial six-month agreement during which UYA will receive access to the building so it may conduct surveys and research. In return, that information would be relayed to officials.

“I see this as a win-win for the city,” said alderman Karen Mosteller. “A six-month commitment to allow a feasibility study at the very least gives us more information about a structure and may provide a path for the future.”

At the end of the period, the parties may decide whether to move forward depending on the results.

“We’re envisioning a true community center where you could go and sit down with a cup of coffee, have a business meeting or just an informal chat, find out what’s happening throughout Southport, and enjoy artists working in the background,” said UYA’s John Keiffer.

If accepted and built as proposed in the preliminary draft, the grand hall upstairs would be renovated into a large room with a stage. It could serve as a venue for visual and performing artists, a public meeting chamber for governing bodies, or a spot for weddings and other events.

Surrounding that space would be dressing rooms, a catering area, a ticket and reception foyer, a conference room, and a “meet and greet” cafe.

“You could have coffee, pastries, light fare provided by the restaurants in the community,” said Keiffer. “Beer and wine for the events that we would have.”

Keiffer added currently there are few places in the city serving as public meeting spaces, aside from a few downtown eateries.

Downstairs, there would be five private and three co-op studios where visitors could watch artists as they work. The central hallway would be an exhibition gallery, and the welcome foyer would have information on upcoming events and local organizations.

There would also be a nonprofit and community organization resource center, a management office, a book “take-and-give” area, and a gift shop featuring work by artists at Brunswick Community College.

Outside, at the entrance on Moore Street, the plan maps out outdoor seating, a sculpture garden and a performance area.

It would all be compliant with the Americans with Disabilities Act.

Keiffer explained the renovations would be funded through sponsors, donations and grants. Once open it would be “self-sustaining,” with income collected through events, studio rentals, and corporate and private backing.

The hall has been vacant for about five years. There have not been funds allocated to undertake any repairs since 2016 when a new roof was installed to prevent further deterioration.

Since then, the courthouse was designated a threatened historical resource by the Historic Wilmington Foundation. It’s also on the National Register of Historic Places.

“We want to maintain as much of the historic character of the building: the grand staircases, the pressed tin ceiling, the magnificent windows,” Keiffer listed.

For the past few months, UYA has been running the “Save the Hall Y’all” campaign to capture interest. Keiffer stressed the need to remediate mold early on so people can see inside the building.

“To get the community totally behind this effort, they’re going to want to at least walk in,” he explained.

UYA has met with representatives from other community organizations, whose responses were described as “overwhelmingly positive,” by Keiffer.

UYA members have also sat down with city manager Bruce Oakley and Mayor Jerry Dove. During that meeting, it was decided UYA would return to aldermen with this idea to pursue a public-private partnership. The members were also allowed to briefly tour the building.

See it at The State Port Pilot